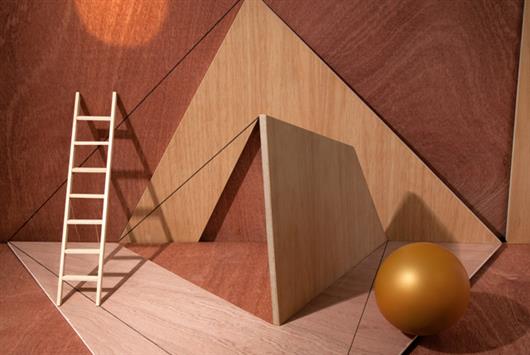 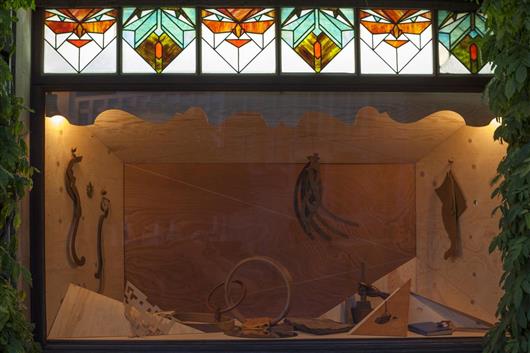 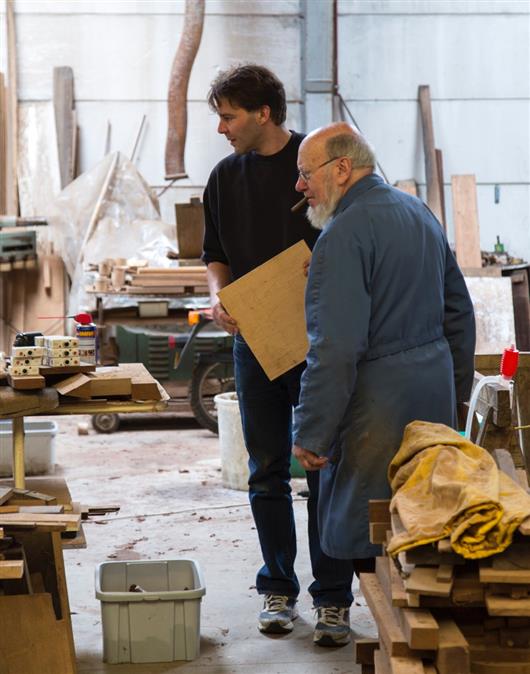 lives and works in Sint-Niklaas — Belgium

Wim Wauman participated at Coup de Ville 2016. This text was published in the catalogue.

From photographer to veneer craftsman. From ‘mise-en-scene’ for a still life, to a spatial installation in which we can move about freely. Wim Wauman has taken an astonishing path in recent years. From 2008 on he staged still lifes that he years later carefully set out in an optical network of different wood textures. From this grew the ‘Paraphernalia’ series for which he collected ‘inspirational’ works from artists for his compositions (2013). In the ‘False Friends’ series these objects steadily make room for a sophisticated geometric scenario of textures, light and shadow (2015).

Wauman draws lines, plays with sculptural shapes and makes bas-reliefs from veneer. In between, he is building a wooden cabinet in such a way as to create a spatial puzzle, filled with drawn lines, wooden surfaces and carefully chosen objects. With this he is for the first time creating a three-dimensional work to be displayed standing alone and no longer as a subject for photography. The shift of interest from two to three-dimensionality and the rewarding exploration of new materials and veneer techniques made him decide to undertake a doctorate in art, with craftsmanship as research area. Through his work he wishes to bring the apparent opposition between thinking and making closer together.

When Meubileering Bosteels in Sint-Niklaas had no one to take over after three generations, Wauman apprenticed himself to them so as to recover some of the skills and remaining wealth of materials. For Coup de Ville, Wauman uses the shop area as a setting for two ambitious spatial projects. A small lateral window will be transformed into a diorama with artefacts recycled from the earlier furniture business. The main area of the store will be dominated by a full-length, half-open structure. Following pre-industrial tradition in art, this can be referred to as a ‘thesis’. All the elements that he has developed in past years are brought together in this: the seamless and economical use of fine veneer, the course that he follows in learning perspective, the (spatial) trompe-l’oeil effect and the creation of his own narrative using the chosen objects. The entity is a puzzle that begs to be unravelled. In his recent work, Wauman includes sayings such as ‘failure is part of learning’ or ‘throw the towel into the ring’. They refer to himself, the failure of the furniture company and guidelines that are used in the craft world.