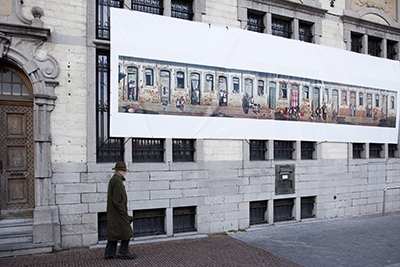 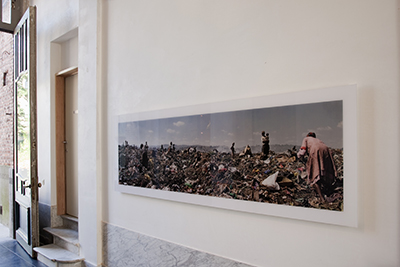 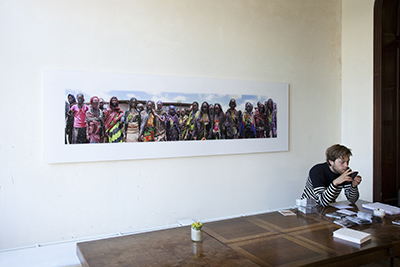 Wim De Schampelaere participated at Coup de Ville 2013. This text was published in the catalogue.

It is always a radical and uncertain decision when someone decides to bid farewell to his steady source of income in order to dedicate himself entirely to art. Yet , a few years ago, photographer Wim De Schamphelaere made precisely that decision. Furthermore, his work consists of slow, deliberate photography which is only created by gradually entering into a community, one that is very far from home to boot. Africa is the continent that interests him. Rarely has there been a photographer who has been able to capture its inhabitants in photographs with such dignity and pride.

He primarily makes images of an entire population group, a village or tribe. But earning the respect of the models takes time, sometimes weeks. Sometimes the adventure comes to an immediate halt when he has only got close to some extremely secluded populations. He visits the least obvious locations, but even there the people are already familiar with the careless tradition whereby tourists freely snap photographs without any communication or sign of appreciation. De Schamphelaere does not speak any language that is used in Africa. Only French and English, but that is not going to help one get along with the Bushmen or in some desolate area – which is indeed on the map but without the residents being aware of this. He sees this as an advantage because the residents become convinced through his sign language. Initially they hereby understand that he is actually an unusual European, but they later also realise that he is really convinced of his cause and is going to great lengths to accomplish what he is doing. Due to his own exceptional height (two metres), he usually has to kneel in order to obtain a decent image of his models… a gesture that is assigned a symbolic significance.

His photographs are related to sculpture, mainly because the persons posing seem almost to be Greek gods and goddesses, or even better – and if this seems like an exaggeration, it is meant well. This is not only due to their physique and musculature, but primarily because of the gaze in which that dignity is convincingly fixed. They are group portraits, but with such articulation of the individual that they forge an affinity with the group portraits from the Dutch Golden Age.

De Schamphelaere is currently considering a new project – it just came out of the blue and involved a request from a chief of the Tuareg: “Guide me from Burkina Faso to Belgium, because I want to see how you live there. But I will only make this journey with my six camels and you along with us.” De Schamphelaere – mainly because friendship sometimes affords you no opportunity to refuse – immediately agreed. This means that for a few months in 2014 he will navigate from South to North on ‘the ship of the desert’: from Burkina Faso through Mali, Senegal, Mauritania, Morocco, France and finally Belgium.