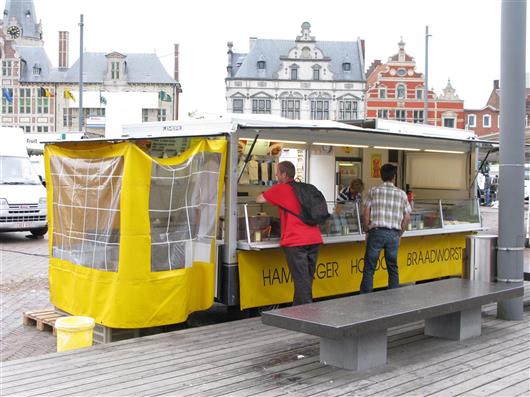 lives and works in Wetteren — Belgium

Tom Jooris participated at Coup de Ville 2010. This text was published in the catalogue.

"When I was asked to do something with the hamburger stall of Eddy and Antonia Roosenboom, who collect contemporary art including my own work, I almost immediately thought of the slogan, 'Art is Food'. After all, art is food, albeit for the spirit", Tom Jooris asserted during the run-up to Coup de Ville. In his work Art is food, which he introduces at the exhibition, he incorporates aspects from three of his earlier paintings. From The pleinairist (2010) he has taken the stripes and the framing of the pictures. The second work The trip (2010), is a painting with a landscape dimension, the frame of which is tightly surrounded by the inner tube of a bicycle tyre. He uses the inner tube again here as an element. He has previously incorporated the slogan, 'ART = FOOD', in a work dating back to the start of this year, but he later painted it to death.

Jooris's artwork is nomadic: it visits different weekly markets in Flanders as part of a stall and in this way mingles with a public of non-experts. To further circulate the work and draw attention to it, Jooris created silk-screen prints that can be bought for the egalitarain price of the cost of a hamburger. Such a sales strategy questions the market value of art. In this way, Jooris echoes Andy Warhol's comparisons between merchandise and art.

Warhol admired the US culture of conspicuous consumption, which ensured that the richest consumers ultimately bought the same things as the poorest peolpe, and he glorified this in his work. This dynamic is also reflected in Jooris's work. However, in his case, it is not about the glorification of capitalism, as is the case with Warhol, although the context in which the painting has been placed may give a different impression.

Jooris changes the principle of the capitalistic mechanism by associating it with a different function. His starting point is the spiritual capital that is an essential requirement of every community, rather than the commercial return. Within this social viewpoint, it is about the effect that art produces. An artwork is a means to an end, not an end in itself.