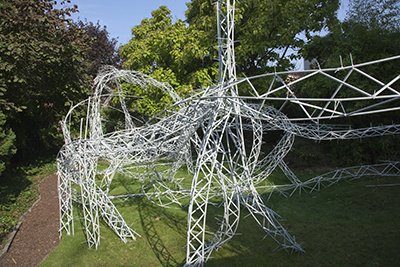 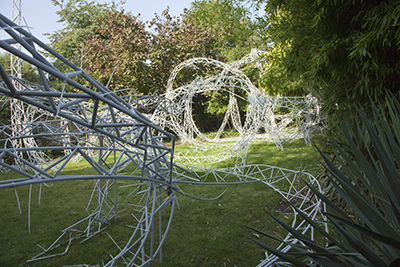 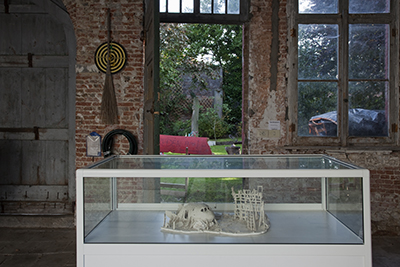 lives and works in Amsterdam — the Netherlands

Tim Breukers participated at Coup de Ville 2013. This text was published in the catalogue.

The artwork exhibited by Tim Breukers – old and new – are inspired by the specific location where they are shown and the development of his artistic practice. Whereas approximately three years ago he sculpted fragile jewels which were executed in porcelain, since then his work has shown an increase of scale. In both instances this has to do with the specifyc possibilities of the studios where he went to work: the EKWC (European Ceramic Work Centre) in Den Bosch and Beeldenstorm (Storm of Images) in Eindhoven. In this case, the impulse to create large-scale works led back to the tragic history of the Hindenburg. “Thinking about the crash is very much in line with the steps that I want to take in my work, in which scale plays an important role – but in particular also the need for human hubris,” by which Breukers seems to refer to mythical predecessors such as Icarus’ fall as well as to the challenging nature of artistry.

Already in earlier works he confronted us with decline and demise. In this regard he presented us with dilapidated works of construction, the scraps of a crashed airplane, shipwrecks, a fossilized car or deconstructed caravan. An ambiguous aesthetic experience is created through the beauty of his design – it appears to dispel somewhat the dreariness of the apocalyptic theme – while the fragility of the porcelain suggests the frailty of existence. He confronts the presentation of these miniaturized events by means of an abrupt leap in scale with a reminiscence of the luxury passenger zeppelin, Hindenburg LZ129. Like the ship Titanic, the development of this 245-metre airship was a matter of prestige, linked to national superiority. After having crossed the Atlantic Ocean seventeen times without incident, the airship crashed on 6 May 1937 under the gaze of curious onlookers. The enveloping canvas shrank in the fire, exposing the ingenious skeleton. From a sculptural and constructive perspective – thus without misplaced Schadenfreude – this carcass was possibly even more impressive than the typical images of the zeppelin. Tim Breukers realizes his interpretation in situ, at the back of the garden of a house built in 1783 – the year in which the Montgolfier brothers sent aloft the first hot-air balloon, which was equally a milestone in the ever recurring ‘desire to go higher’.