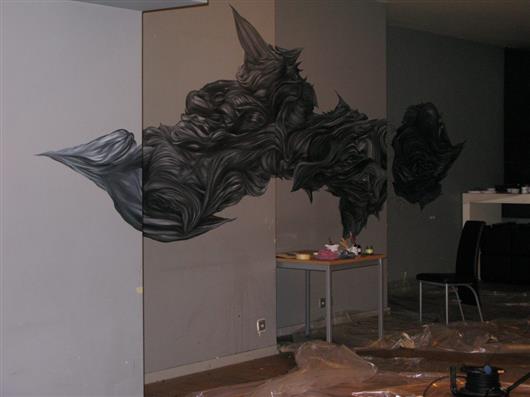 Stephan Balleux participated at Coup de Ville 2010. This text was published in the catalogue.

In his oeuvre, Stephan Balleux resorts to the use of various media such as painting, drawing and computer animation. He examines the role of painting both within its historical context and in the contemporary (digital) culture.

For the Coup de Ville exhibition, Balleux has createad Blind spots. Cyclops, a mural that is inspired by the non-isometric configuration of walls intersecting at unequal angles within a commercial area. With this work, the artist examines how our perception is variously affected by the way we look at things from different angles. The particular appearance of the wall, with its three staggered and slanting surface planes, creates a hiatus in our observation of the subject. Any representation that the viewer, on entering the area, looks at from the front but at a certain angle does, in effect, display blind spots. And it is precisely those blind spots that constitue the essence of the mural. By consciously incorporating these hiatuses into painting, the artist creates a trompe-l'oeil effect whereby the viewer is given the impression of experiencing the representation nonetheless as one unbroken whole unit. In contrast, when the painting is seen straight on from the front, the fragmented discontinuance of the tableau becomes evident. The two-dimensionality of the flat surface is emphasized by the doctoring of the image. By the perception of it from one specific spatial point of observation, the illusion of a three-dimensional form is created.

Blind spots. Cyclops displays an exaggerated brush stroke. The unabashed evidence of such strokes makes the subject auto-referential and resolutely magnifies the art of painting above all else. By choosing a wall as his canvas, the artist refers us to the historical tradition of the fresco. In the formal sense, the rampant presentation of the subject matter exhibits a close bond with tags from the world of graffiti. The ancient tradition of the fresco, which is essentially an indoor art, and the graffiti splatter art that is associated with the exterior of public buildings and constructions, here are given expression into a single fused form.