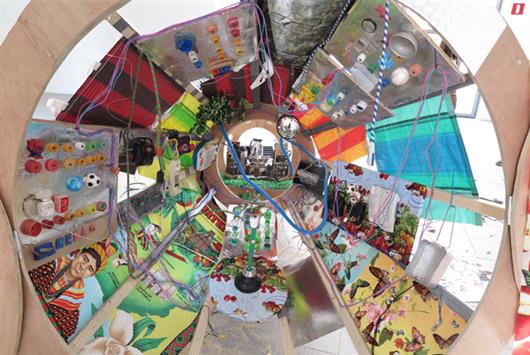 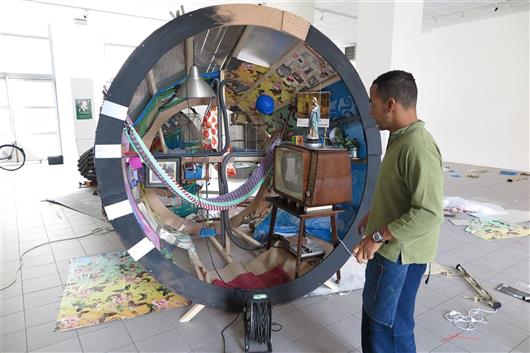 Simón Vega participated at Coup de Ville 2016. This text was published in the catalogue.

In the second half of the 20th century, the Cold War was so hot in Latin America that it tore society as a whole. Unfortunately, the space race between the USSR and the United States was not only fought high in the air. Third world countries such as El Salvador were also an arena where the battle between the superpowers unfolded fatally, resulting in the fragmentation of both the country and population. In 2016 these shards are symbolically glued back together by Simón Vega from El Salvador.

Born in the capital San Salvador in 1972, his country bestows on him a thirteen-year civil war that ends only in 1992. Studies in Mexico’s Veracruz and the Spanish capital Madrid provide him with a mastery of the visual arts. As an avid surfer he lives and works in La Libertad, a coastal town on the Pacific Ocean. During his walks on the beach, he gathers together material with which he builds sculptures.

For Coup de Ville Vega cobbled together his series ‘Tropical Space Proyectos’ a new space capsule based on a historical model of the Gemini (1960-1966) from the American space travel programme. Just as in the original, this conical spacecraft is intended for two astronauts, consisting of a capsule with a connecting piece. In the exhibition space, however, the impression is given that the vehicle has crashed and it looks like a homeless soul is able to profit from this woeful incident. In any case, someone has appropriated this cosmic ruin and then furnished it as a cosy refuge. The interior is a mix of Latin American and Flemish utility items, decorative touches and knick knacks. ‘Gemini Chanti Dúplex Capsule’, the full title of this installation, refers to technological developments in the space race, but also alludes to the duplex apartment, while ‘Chanti’ is a dialect word for a house in a slum.

Simón Vega often relies on the futuristic design of science fiction and ‘first world’- technology and mixes it with discarded products. With this the artist creates a “middle-of-the-road’ world and at one and the same time both denounces and embraces it. His works lay testament to a hybrid origin where geopolitics, trivial mass culture and utopia merge. Poetry lies in the different interpretations: do you look with a first or third-world eye? With his direct images Vega once again stimulates discussion around the mimesis in art, and does it with both historical reflection and disarming humour.