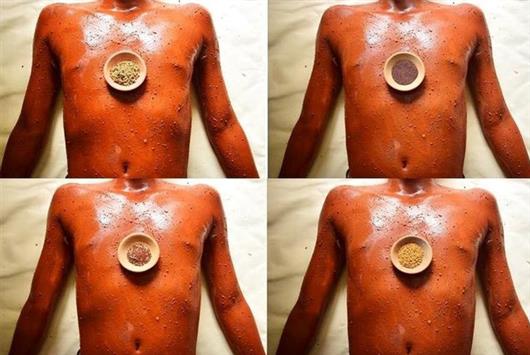 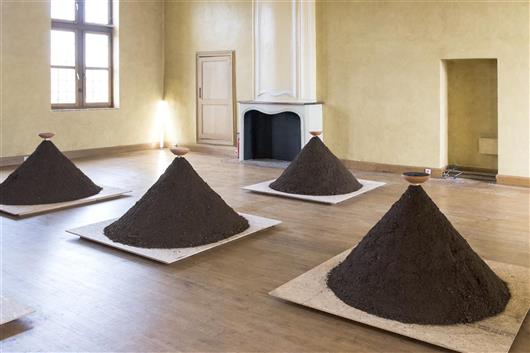 lives and works in Kathmandu — Nepal

Sanjeev Maharjan participated at Coup de Ville 2016. This text was published in the catalogue.

Nepal is situated between the two gigantic countries of India and China, which are booming both economically and artistically. Nepal, the country on the roof of the world, is limping behind in both sectors and remains relatively unstable politically. Thanks to the disastrous earthquake of 25th April 2015, more than 150,000 families had to start again from nothing. This did not make it easy for modern day visual artists like Sanjeev Maharjan to develop an artistic career or receive any recognition.

Maharjan was born into the caste of farmers in Kathmandu. The installation he is creating in Sint-Niklaas is a tribute to his ancestors and their rituals: ‘The Maharjans are a caste of farmers from Kathmandu. In our culture we show a lot of respect for the food that we eat. Therefore, food serves not only to fill the stomach but it is also used in various rituals within our culture. Our feasts are usually linked to farming. We pray to nature. Even though we are no longer active in farming, my family still preserves the seeds, grain and tools that they used for generations. I think that they can appreciate their value very well, not only as food and equipment, but because it is their personal and collective heritage’.

Sadly, the hard-won farmland of times past has been turned back into jungle, thanks to changes in the world. The dying out of agriculture will possibly also mark the end for its accompanying rituals and cultural traditions. The roller-coaster of folklore is thus sent irrevocably on its way. It has, however, inspired the artist to give the farmers’ customs, stories and experiences a new life through art. Maharjan has created a spatial installation inspired by a traditional dish, Samay Baji, from the Newari culture in the Kathmandu valley. It involves a massive mountain of food, built in a public place, often in the vicinity of a holy shrine, that is distributed after the ceremony. Traditionally, a copper bowl of grain is placed at the top of the conical structure of clay and foodstuff. The artist includes this fact in a series of photos in which he uses his own, monochrome-painted body as an altar.