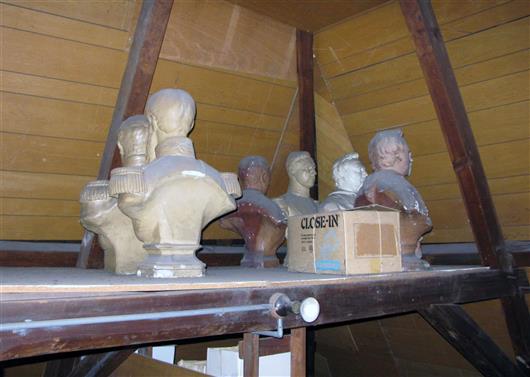 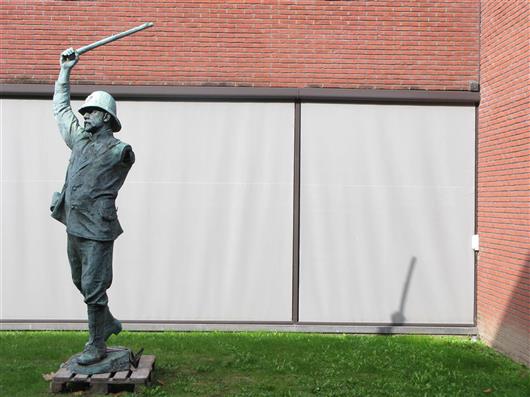 PAVILION OF THE HIDDEN SCULPTURES

This text was published in the catalogue of Coup de Ville 2013.

A fictitious pavilion has been set up in the same space where artist Ben Benaouisse unites his politics and polyptychs into ‘Polittych’. It consists of sculptures and sculpture remains that have gradually obtained a hidden status due to forgetfulness, lack of attention or substantial or plastic loss of prestige. Just as Benaouisse recuperates and processes materials into a new significance, these sculptures from attics, storage rooms, living rooms and gardens are illuminated in order to revitalize them by means of an installation. By way of a manoeuvre, this connects with the work of Gabriel Rico Jiménez, which is located a little further on the tour and reflects on the notion of ‘representation’.

Due to sheer habit, many sculptures in cities, in casu Sint-Niklaas, are no longer active signifiers in the cityscape. In a number of instances we can consider ourselves fortunate, but in a wider context this situation tells us something about the low level of perception and minimal questioning of, admiration for or judgment about that which surrounds us. Is it possible to develop greater intensity in the way we look? Can we bring some things to life? In order to lend support to this issue, the film “Les Statues meurent aussi” by Chris Marker and Alain Resnais from 1953 is shown between the gathered sculptures. This came about under commission of the collective, ‘Présence Africaine’, of which intellectual heavyweights such as Aimé Césaire and Léopold Senghor were members. The film was banned for ten years because of the danger of arousing anti-colonial sentiments. Independent of this particular interpretation, which is indeed present in “Les Statues meurent aussi”, numerous other interesting questions are raised which remain very relevant for the way we deal with art today.

This quote from the film refers to African culture where masks are part of rituals and thus of a living culture. They are not made merely to be shown, although they clearly have aesthetic qualities. In the pavilion of hidden sculptures, the purpose is ultimately rather museum-like, but by showing it we hope that the spirit is activated and judgments of taste are formed, which hopefully will encourage broader critical thinking.