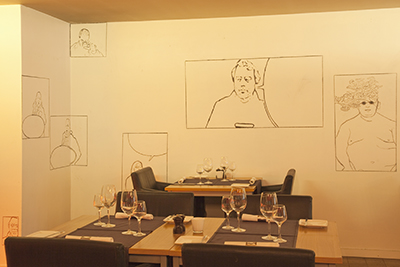 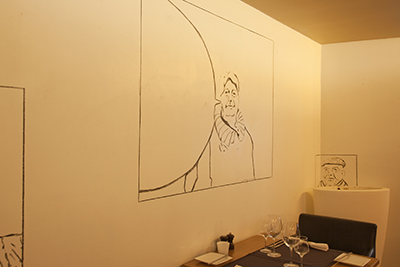 Nova Jiang participated at Coup de Ville 2013. This text was published in the catalogue.

Nova Jiang primarily makes use of computer based media and stimulates the creative participation of the public in her work. In 2012, she was one of the laureates of the New Technological Art Award in the Zebrastraat in Ghent. In Sint-Niklaas, she conducted the workshop Creatomatic during the winter of 2013, a software designed to accelerate the imagination and prompt new inventions. In concreto, this works by juxtaposing two random objects from a pre selected series with one another. Creatomatic resorts to surprise in order to circumvent the rooted modes of thought. It invites questions concerning stereotypes or prejudices and prompts thoughts of (in the optimum case) alternatives for them. The artist’s motivation to explore new media finds its cause in the search for a possibility to present her traditional, analogue drawings in a time that is dominated by games. With reference to the phenomenon that communities become connected around certain computer games, she investigates the ever-changing definition of community sense and public space, whereby she erects a bridge between the physical and the virtual world. This generally results in structurally open systems where joy, confusion, and improvisation flourish.

Ideogenetic Machine is an interactive installation that involves portraits of viewers in an algorithm generated cartoon feature. In actual fact, she puts her landscape drawings in the central position (she grew up amidst New Zealand’s overwhelming nature) and peoples them with characters that are posing in front of her camera. Via a software programme, these portraits are being deployed in a database with nature drawings. The lay-out and configuration of images around which the storyline constantly keeps evolving never repeats itself. The software also adds empty speech bubbles to the composition. These are based on her experiences as an immigrant in New Zealand and, subsequently, the United States. Because of her Chinese origin, she did not immediately master the language and her presence was restricted to observing people and her surroundings. In Coup de Ville, she exhibits the portraits of nearly everyone who posed as a model during her earlier workshops in Sint-Niklaas.