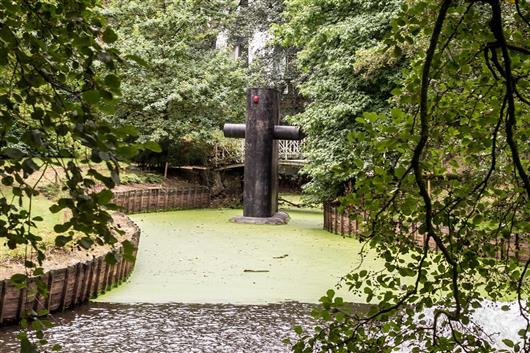 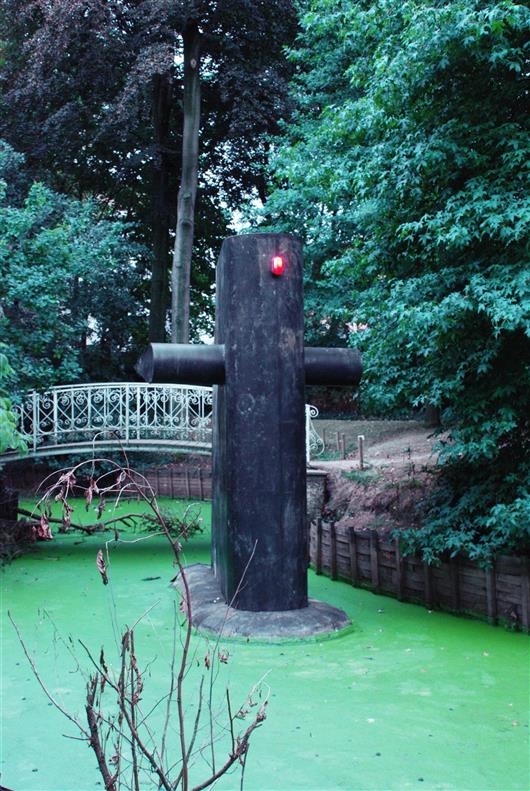 lives and works in Sint-Gillis-Waas — Belgium

In addition to developing his own oeuvre, Niko Van Stichel works with Lut Vandebos. Together, this artistic couple Van Stichel- Vandebos focus regularly on the integration of art in the public arena.

Niko Van Stichel’s sculptures are often enormous: his work ‘Faith in 3D’, inspired by a crucifix, is a potent example of his. The cross serves as a symbol of the numerous wars which have been waged in the name of religion but additionally bears resemblance to a Frisian horseman, a movable military obstacle. The unexpected encounter between two different elements is nevertheless a strategy he has applied on other occasions. It is often related to a relocation or a displacement – a term popularized by Jan Hoet in his 1992 Documenta in Kassel.

In fact, it is a surrealistic methodology in which something is removed from its familiar habitat and relocated within a different context. Usually it sparks a reaction of amazement or disbelief. This also awaits the visitors in the  Casinopark during the Coup de Ville exhibition. Since his early career Van Stichel has shown an affinity for rockets and technologically advanced equipment, which he recreates with low-tech materials. In the classic pond in this city park he has the upper part of a gigantic submarine emerge. It seems as though this vessel has undertaken a wrong navigational manoeuvre and as a result is forced to relinquish its invisibility.

‘Suburban Excursions’ connects with Van Stichel’s broader exploration in which he principally examines what is imaginable, attainable and potentially realistic. Just like the novelist Jules Verne, many of the fantasies in the science-fiction genre he undertook later became reality. No matter how frivolous the perception around the submarine may seem, in essence it principally concerns a freedom of thought, unfettered by dogma, in which one acknowledges thoughts that come to light outside our limited thought-box.