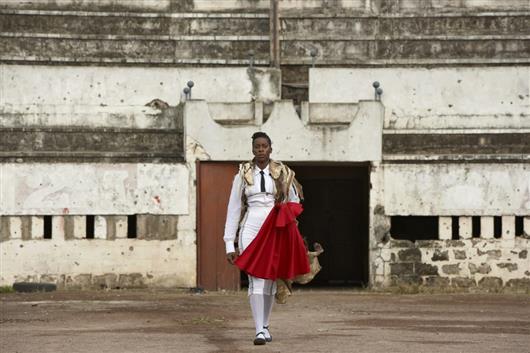 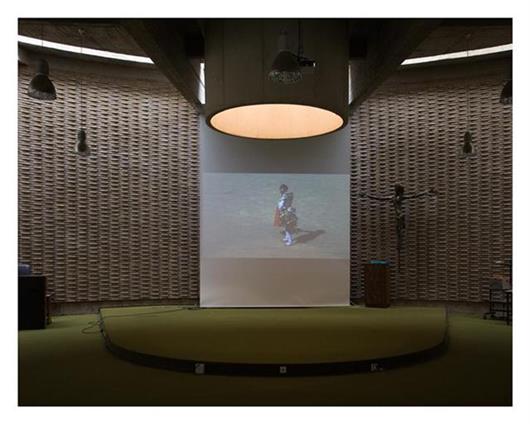 Nandipha Mntambo participated at Coup de Ville 2010. This text was published in the catalogue.

Through her work, Nandipha Mntambo explores the position of women as militants in society, history and mythology. Although the artist uses a variety of media, she often uses her own body, and cowhides regularly show up in her work. She attributes this referral to her being born in Swaziland, where owning and being in contact with cattle plays a crucial role in the local society.

In her video montage Ukungenisa (the title means: like a general overlooking the battlefield) Mntambo takes on the still controversial role of the female torrero. Her historic example is Conchita Citrón, who as the first matadore successfully worked as a bullfighter since the 1930s. Mntambo has little or no interest in the fame factor famous: instead, she explores the recognition that Citrón managed to gain as a woman within an all-male world. Mntambo always combines the realisation of gender equality or emancipation with a broader context of breaking though boundaries.

In Ukungenisa, the artist imitates the moves that are part of the deadly ritual of bullfighting with great concentration and as elegantly as possible. Mntambo is dressed as a bullfighter. But the tanned cowhides she wears on her back are strange when combined with this outfit. On the one hand, they function as a kind of armour, but they also refer to the relationship between the animal and the human being. Mntambo's fascination with this connection come from (Greek) mythology, where the human-animal relationship symbolises the struggle between nature and culture. This is reflected by the supreme god Zeus changing into a bull in order to abduct and even rape Europa. Mntambo sees this as the brute opposition between ruler and ruled. In her video Ukungenisa, this theme leads to a conscious choice of a deserted arena in Mozambique.

During the colonialist period, blacks fought to the death at this location for the entertainment of the Portuguese rulers. Mntambo re-engages in this fight, but the absence of spectators in the immense arena removes the possible entertainment value of the ritual that is performed. The emptiness in which she moves evokes the loneliness of an existential struggle.