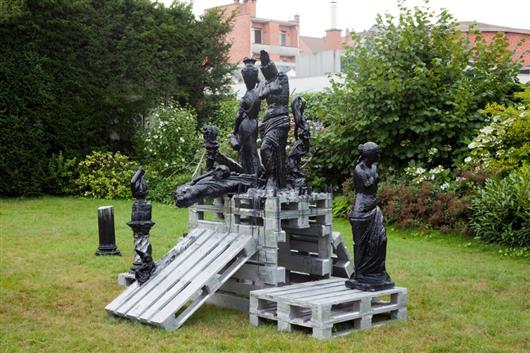 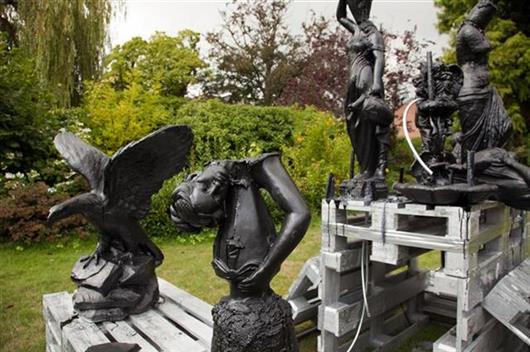 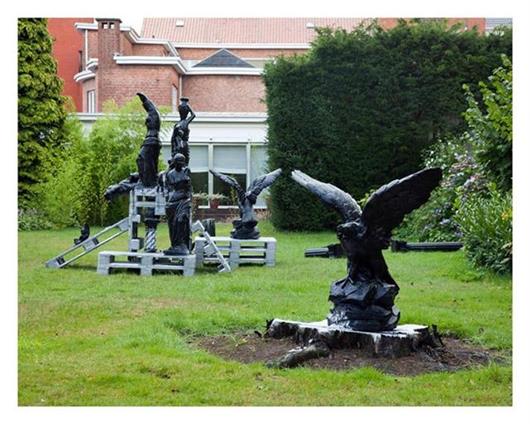 Marc Bijl participated at Coup de Ville 2010. This text was published in the catalogue.

Marc Bijl interprets icons from the arts and popular culture as signs of (political) ideologies. He mixes or contaminates them with subcultures such as goth, punk and anarchism. This results in public interventions, sculptures and installations that undermine or on the contrary sharpen our perception of the world. For Coup de Ville, Marc Bijl has created - from a traditionally artistic viewpoint - an aberrant statue park in the garden of a private residence. For this, he uses decorative sculptures that are sold in large numbers in garden centres. The artist, however, radically disturbs the pastoral and enchanting array conjured up by this sort of image by staining them. With his aggresive intervention, which refers to the provoking acts of street culture, he brings the public into the private domain.

The result is an installation that conjures up the atmosphere of a vandalized city ruin. It is a statue cemetery in which in an ironic manner, the link is created with cities in ruin and tourism to famous cemeteries full of splendid memorial stones. Think of the famous Parisian necropolis Père-Lachaise, which is a popular tourist attraction and an absolute must for city trippers and heristage tourists. We go on a pilgrimage to the graves of well-known dead people such as Jim Morrison and Oscar Wilde and honour the heroes of our modern culture as new gods. The other side of this fetishism is, however, the increasing level of theft and destruction of memorial ornaments. Reference can be made from here to the interesting confrontation that develops in Marc Bijl's installation between this romantic idolatry, the vandalism and the undermining of our society by the artist. Bijl's intervention also chimes with the problems of redesigning old cemeteries: they are currently being cleared away and recplaced by parking spaces or statue parks, thus losing their original meaning.