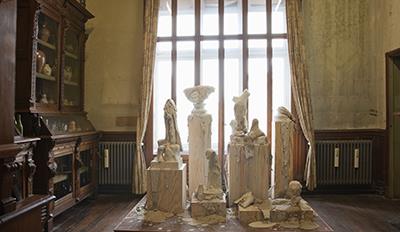 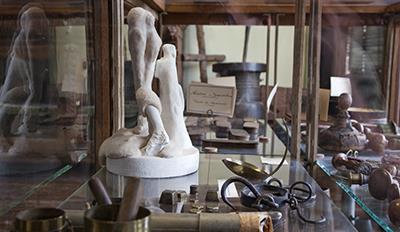 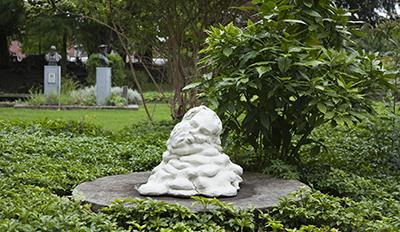 lives and works in Amsterdam — The Netherlands

Lorenzo Quintanilla participated at Coup de Ville 2013. This text was published in the catalogue.

Out of curiosity for the craft, he travels like an explorer through different materials such that, the process and the experiment being at least as important as the final destination. By transforming renowned images from Western cultural history, he sketches a critical parody of the concept of the end of days. To this end, the statue is manifest as the ultimate artefact of an age and society. The abrupt end of the apocalypse hereby serves as a contrast to the concept of eternity. In modern cultural history, Oswald Spengler, with his The Decline of the West (1918/1922), is roughly considered the founder of cultural pessimism – more recently by doom thinkers Francis Fukuyama or Michel Houellebecq, with his harrowing Elementary Particles.

Destruction and creation, however, are two sides of the same coin. The immobility of the past can, in its rigidness, also nip every innovating tendency in the bud. In the Renaissance period, architect Donato Bramante received the nickname ‘ruiner’ because he destroyed several sacred graves in Rome in order to  build the new Saint Peter’s Basilica – a production strategy typifying the current dynamic of all of Asia. It is important that Lorenzo Quintanilla’s interest leans toward the constructive side: the possibility of creation on the sediments of the past. He translates this into the fluent and flexible production of well-known, nearly sacrosanct sculptures. His iconoclasm points to a transition stage in our culture where he focuses his attention on the potential merging of a variety of cultures and periods. His sculptures are not nostalgic memories of lost ideals. On the contrary, they are relativisations that form the starting point onto which the new can be grafted. His young work is thus equally concerned with the difference between preservative copying and innovative creating. (Artistic) Thought comes to a standstill when concepts from the earlier world cannot be reconceived according to the reality of today.