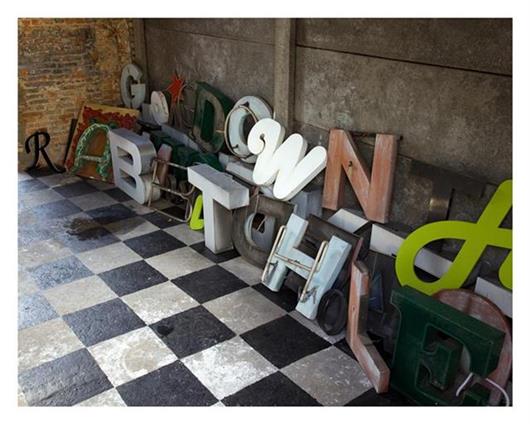 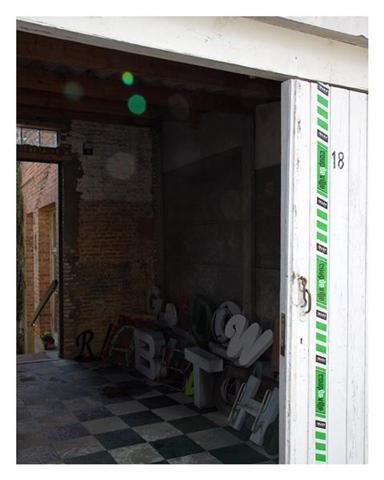 Kelly Schacht participated at Coup de Ville 2010. This text was published in the catalogue.

Kelly did not choose an impressive piece of architecture with a unique history as the location for her Backdrop installation. She opted instead for an ordinary garage, such as can be found throughout Flanders. Connected in a line and because of the typical, almost standardised looks, this domain of the car is highly recognisable, even though it is perhaps fairly devoid of character in itself. Nor, in its present state, the garage is any longer used. As a result, it is almost a non-space within an exhibition trail that has all kinds of attractive locations.

Yet, this is a unique location within the trail, according to Kelly Schacht. You will be both removed from the world around you and at the centre of it, because you will have a magnificent view of the back of the town. The garage is also the border area between private and public space, a tranzit zone; and, during the exhibition, it will also be used as a way through to a garden. As a way through, the garage itself is not a place to linger. Yet, the narrowed space will momentarily slow the progress of visitors who are following the exhibition trail. "It made me think of the Alice in Wonderland story and her tumble into the rabbit warren", says Schacht. Bearing this in mind, she chose to create an installation around statements that abstractly speak of the imaginary.

Schacht composed a series of sentences by hanging and sacking a collection of loose letters. The letters come directly from street scenes in Sint-Niklaas, and have literally been taken from signs outside neighbourhood shops, bakeries and pharmacies. After the exhibition, the artist will return them to their original place. Schacht regards her installation as literal slices of the streetscape. She wants to create a confrontation in this way, between the hidden garage and the entire city. She also wants to see this place as one that is never really used, and yet is always prepared for the unexpected. Like the guestroom that nobody ever enters, but with a bed that is always made up, waiting for a guest.