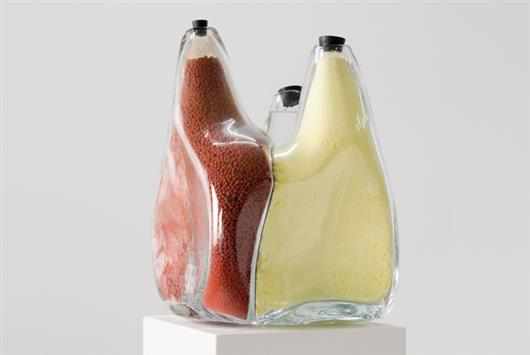 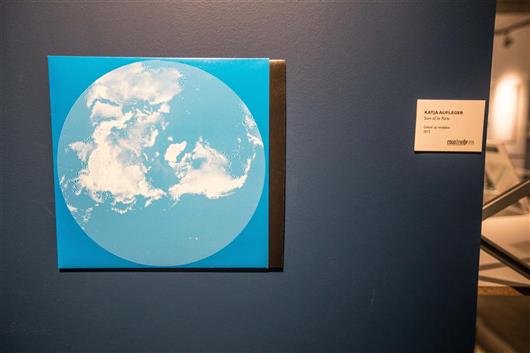 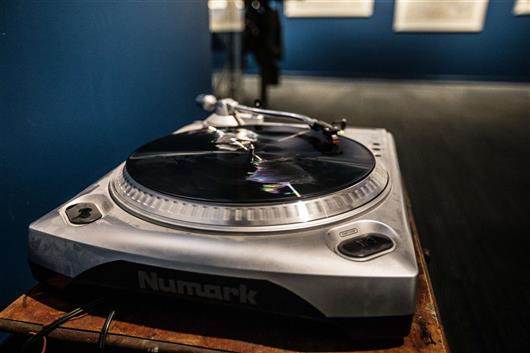 Katja Aufleger participated at Coup de Ville 2016. This text was published in the catalogue.

Katja Aufleger’s art works are a ‘liaison dangereuse’ between the conceptual tradition and diverse genres of applied art.This is how she realized a series of necklaces, ties and baseball caps marked with the letters ‘EGO’. The word ‘EGO’ refers to the desire for success and artist’s endeavour to showcase his/her personality in visual language. It also refers to the ‘selfie’ or society re-shaped to the egocentric ‘me, myself and I’ community.

A worrying concept lurks in the Coup de Ville ‘BANG!’ installation. These ae blown-glass objects consisting of two or three separate entities each combining to form an entirety. The contents of the glass bottles vary in texture and colour, which creates a seductively appealing effect. The interaction between the colours, the distortions and reflection of the light are reminiscent of traditional Murano glass. Nothing suggests the idea that in these attractive shapes danger lies dormant. The material in each object is securely separated by a thin glass wall. The chemical substances are incompatible and react violently if they come into contact with  each other. In order to guarantee order and stability, a system of separation must clearly prevail. The size and volume of the vases is painstakingly measured by the quantity of substances necessary to create an explosion if they are mixed. What is frightening is not the fact that this involves a terrorist laboratory but that it concerns ingredients that are commonly found in any household.

And meanwhile the world continues to turn. Mercator already knew that. ‘Sum of its Parts’ is a black vinyl record on which Katja Aufleger portrays the world as a white shadow. When one looks at the matt black LP at an angle, one recognizes one of the earth’s hemispheres. On the A-side the northern and on the B-side the southern hemisphere. The shape of the earth determines the sound on this vinyl record. The various heights on the earth’s surface are converted into tone frequencies. A rhythmic and scratchy sound can be heard. A metre above sea level is equal to one Hertz. When playing, the needle revolves 530 times around the earth, spiralling from equator to pole 33 times per minute, and it takes 1.8 seconds to go around the world once. Mount Everest is the most audible tone. In contrast, the oceans prescribe a pool of silence.