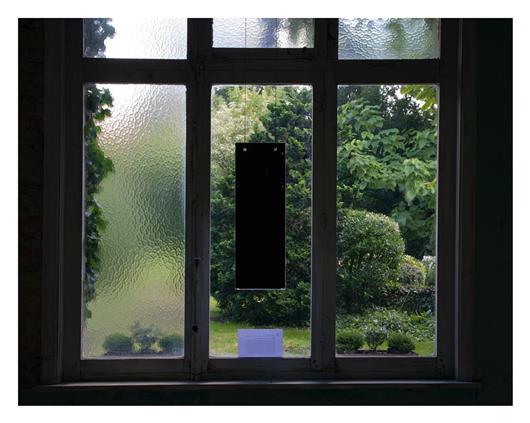 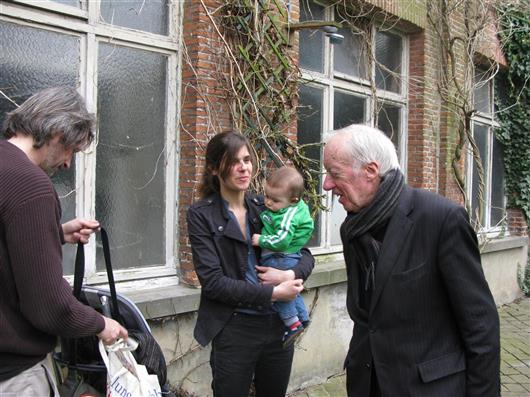 Katinka Bock participated at Coup de Ville 2010. This text was published in the catalogue.

In her sculptures and installations, Katinka Bock strives for simplicity of form and for that reason uses only a minimum of tools an other sundry accoutrements. Her art is low-tech and looks to establish a dialogue with the characteristics of a given area and its history.

Bock has created her installation Aussicht zu zweit inside a vacant area that formerly functioned as a textile workshop located in the garden of a patrician mansion. The former employers, who also lived in the building, made continuous use of the garden. To preserve privacy, the windows of the workshop, while translucent, were made of matted relief glass panes, which prevented anyone inside the workshop from looking out into the garden, thus excluding voyeurism on the part of the textile workers and in a simple but effective manner assuring the owners' privacy.

In Aussicht zu Zweit, Katinka Bock has replaced two of the matted panes in the central window by new ones, this time of transparant glass, thus eliminating the optical seperation between the two areas. Into this visual relationship thus created, the artist has added a mirror, which, inside the shop, is suspended a half metre in front of the one 'opened' window. By turning the mirror's reflecting side towards the garden, the viewer is confronted by his or her own image. After the tradition of minimalist art, Bock draws attention to the parameters of distance, proportion, volume, texture, and the manupilation of light. Via the position of the viewer in space and time, the artist aims at an image reflection of the human Self.

A second element that the artist has added to her creation is a steel channel bar that, at  a height of some two metres, spans the entire width of the area. Excess plaster dripping from the coating that as applied to cover the bar has been left on the floor below, in the way bird droppings remain on the ground. Two transverse wooden panels are tightly squeezing pieces of fabric and bits of dried flowers together. The artist condenses the form of Nature outside and the textile production process that was happening inside into a still life tableau. With the Belgian granite tile that secures one of the panels at the bottom, Bock refers to the local home industry tradition.