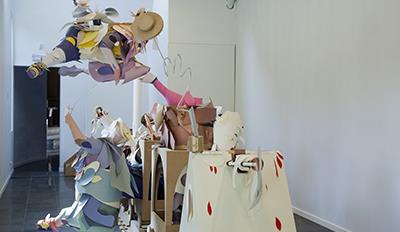 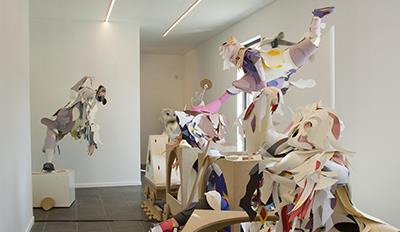 lives and works in Amsterdam — The Netherlands

Karen Sargsyan participated at Coup de Ville 2013. This text was published in the catalogue.

What is immediately striking is Karen Sargsyan’s use of material. Not that paper is so exceptional, but the fact that he uses this material as the basis for making life-sized, kinetic sculptures is. In the wake of the cubists, Dadaists and surrealists, Sargsyan cuts, bends and folds this material into surprisingly expressive and richly detailed three-dimensional forms. It is remarkable that Sargsyan has developed this technique entirely as an autodidact, and his starting point arose from the need to give form to the way in which he analyses reality. Only later did he seek to join the art world and had academic training.

Using incisions, fanning-out and corbelling, Sargsyan creates characters that hang about the space dynamically. Using movement, colour and sound, the frivolity and joie de vivre flow toward the spectator. Some will let their senses and mind be stupefied by the seduction of the spectacle. Those who, on the contrary, look more attentively, will notice that this unbridled lightness is only one layer of his theatrical world. Certain colours also refer to blood, heads are cut off and body parts appear mutilated. The playful atmosphere evoked by the humour or technical effect does not last long, and clearly has a disturbing aspect.

Due to his critical disposition and personal background, Karen Sargsyan’s work often refers to the repression and limitations under communism in Armenia, his motherland, and other totalitarian regimes. The sound that he uses for the installation, ‘Ode’, is by Vizovsky – an actor, poet and singer whose texts and music were a thorn in the side of the political establishment. His carrousel of figures suggests suppressed people – a rebellious bunch that Sargsyan uses to subtly refer to confinement and dissidence. By means of his strategy of exaggeration, a particular bodily canon is created which, as a figure of speech, connects with the grotesque. Sargsyan therefore feels inspired by writers such as Fyodor Dostoevsky and François Rabelais.