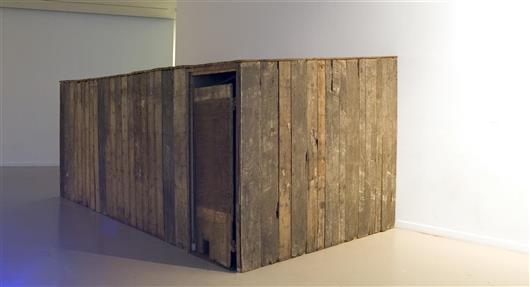 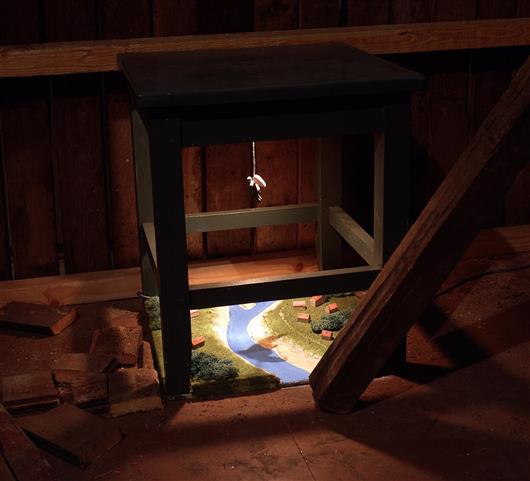 Ilya Kabakov participated at Coup de Ville 2010. This text was published in the catalogue.

The My grandfather's shed installation creates an initial impression of decay and is perhaps unlikely readily to inspire people to enter it. However, anybody who opens the door that stands a bit ajar and decides to enter, suddenly finds him or herself inside a different world. In the corner stands a chair without a back and with an unexpected light fixed to the underside of the seat. The light falls on to a miniature relief landscape built up between the four legs of the chair. The somewhat sentimental landscape recalls reminiscences of innocent, peaceful times: a river snakes across the wooded landscape, along the river banks are pleasant houses, in the distance a belfry rises... Then, from above, a winged angelic figure is floating over the landscape descends. This figure contributes to creating a mystical, miraculous ambiance.

Aside from the alternation between this chiaroscuro, this installation also plays around with scale and perspective: first, there is the location (and delocation) inside an exhibition space; next, the visitor is on the inside of the shed confronted with a broad landscape with its miniature angel. Although the actual subject - namely the landscape - takes up the central position in the ensemble, it is nonetheless to be interpreted as part of an integrated whole entity with its environment and actually needs this relationship in order to exert its full effect.

In Kabakov's oeuvre, the dominant element is people and their relationships with the environment, with all their dreams and desires that contribute to an escape from an often imperative and complex reality. In this particular work, Kabakov inspires to reflection about Utopia and reality, about security and escape. To this end, he uses a universal visual rhetoric like a metaphorical language that is experienced identically across all borders, wherever you may be or go. As an artist, Ilya Kabakov became well-known in both East and West after the fall of the Berlin Wall and his participation in Documenta 9 in Kassel in 1992.