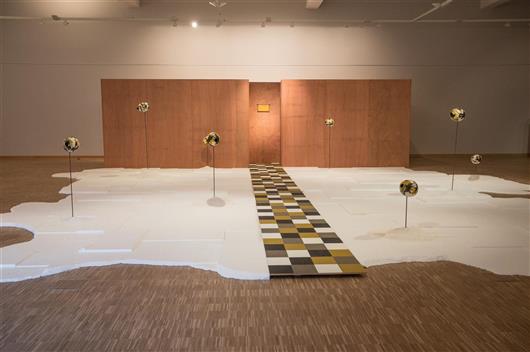 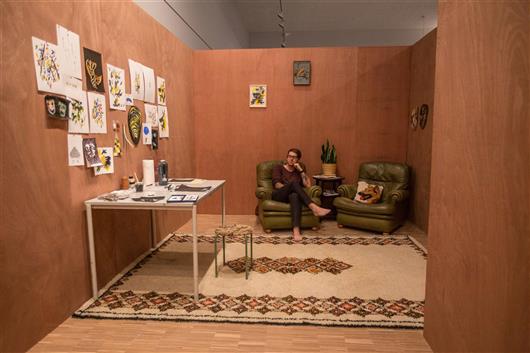 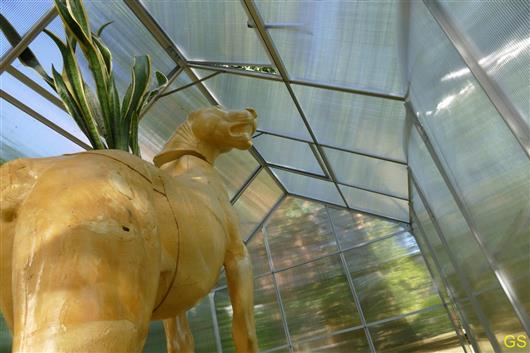 Ignace Cami participated at Coup de Ville 2016. This text was published in the catalogue.

His work was also on show in the exhibition 'Exoten' in 2015.

Behind the barren, alien landscape, a scaled-down version of the Sublime, a studio can be seen. Perhaps you can hear thumping: ‘Is he working? Are you allowed to disturb him?’. Honeycomb like a cosy fire or a light in the window attract the anticipated traveller ... ‘Art’, says Ignace Cami, while expertly referring to the French philosopher Alain Badiou, ‘is a special kind of truth, a procedure for assessing the truth, which is completely intractable.’ Unwittingly but purposefully, it sets something in motion.

From our childhood we start building an existence, an identity, with words (which we borrow from Another). It’s a botch more or less adapted to comply with what others want. There’s the rub: each time you have to guess what that desire is. Cami endeavours to stimulate people, through his installation, to enter into dialogue with themselves. We are always intent on being someone, to present ourselves – who ever stops to think about it? The greeting, the ritual of polite phrases and a brief exchange are only the embellishment with which one avoids real encounter. Person meets person. That is where Cami intervenes.

Cami compares life with the Sublime, an awe-inspiring landscape where man feels small and insignificant. Life is often the journey to uncharted human regions. It is easier to circumvent, dam up or demarcate them. He directs the gaze of his audience to the honeycomb, the sweetmeat of (Maghrebian) hospitality, beyond the uncertainty that the Sublime in its wake. Conquer (Flemish) anxiety and go and find space, where perhaps the artist himself resides.

Every meeting, has a ritual: one of give and take. That’s how it is. It regulates the meeting and what remains of it afterwards. One who gives creates an obligation for the other. The honey is ready. The rest is up to the visitor.

So, who is meeting whom here? In this way Ignace Cami triggers that ‘something’, the truth procedure, the stranger who is unfamiliar to himself.