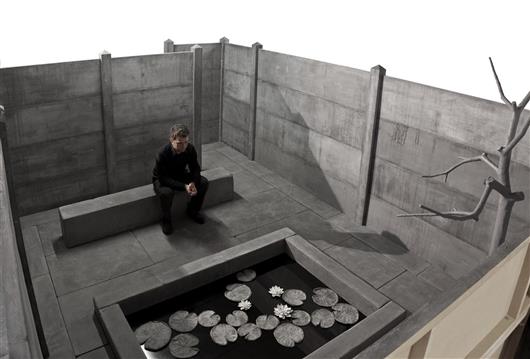 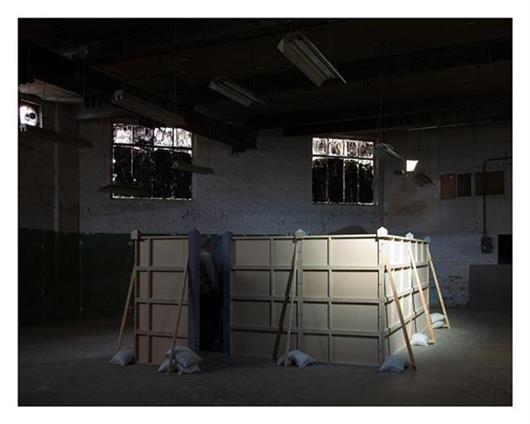 Hans Op de Beeck participated at Coup de Ville 2010. This text was published in the catalogue.

"Kitsh is the product of attempts to want to express much, to make a grand gesture", so said Hans Op de Beeck during an interview in February 2001*. Already at that time he was occupied in creating monumental landscape models, life-size installations, photos, drawings, and films. In each and every case it concerns straightforward fragments excised from the modern, everyday world wherein few striking or notable characteristics are to be found. In spite of changes, the artist leaves the topographical vagueness and the acute monotony pretty well intact and avoids the expressive processing of the proffered reality.

His accessible installation, Secret garden, is an extension of the artistic research studies conducted around 2001 but effectively constructed only in 2010. Central to the work is the humanisation and domestication of the environment. In contrast to the works relating to public spaces  as sources of inspiration, Op de Beeck in this instance simulates a private location. He evokes an artificial segment of nature that can serve as a paradigm for the enclosed little garden plots that sit squeezed tightly in between the walls of houses within the fabric of urban neighbourhoods. With reference to form, the wooden posts at the exterior of the stacked concrete slabs reinforce the artificial and, at the same time, helpless nature of the whole structure.

Op de Beeck stresses the fictional aspect of this artistic composition and refers to the function of memory at the time of its creation. He poses the question how a person can remember a garden that he or she has visited. From this point of contact between imagination and reality, between fact and fiction, he has created this work. While we are not dealing here with an actual landscape that would inspire superlatives in its description, the installation does nevertheless effectively set the scene for the attempt to create a secure heaven. The work also reveals in this process one of the basic characteristics that marks Op de Beeck's oeuvre, namely the absurd elasticity in the relationship between the tragic and the grotesque.