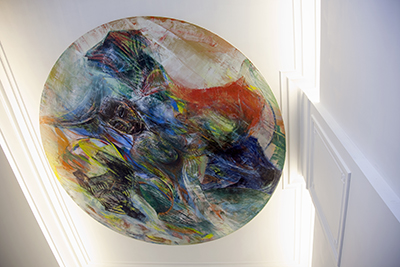 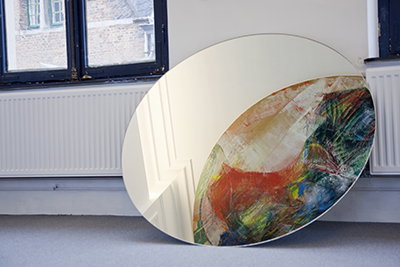 lives and works in Berlin — Germany and Heerlen — The Netherlands

Hadassah Emmerich participated at Coup de Ville 2013. This text was published in the catalogue.

Her oeuvre consists mainly of drawings (charcoal or ink), graphics (woodcuts) and paintings that, depending on the situation that presents itself, expand into enormous murals. Flowers, plants, fruits – growing, blossoming or decaying – and the representation of the woman are recurring themes. While her work takes a decorative approach – with colorful, linear vegetation that suppresses the horror vacui –, this constitutes a signifying component in her iconography. She by no means intends her work to be superficially pleasing. Revealing details, words and sentences are often hidden within the broad or intricate patterns. Due to her multicultural background, which is both Asian and European, her subjects are oriented around cultural identity and the human psyche. The artist describes the internal as eclectic and liquid, with a tension between what is universally valid and that which is particular, untranslatable and inalienable.

In Coup de Ville, she enters into dialogue with the artistic and existential search of the late Jan Buytaert, the artist in whose house she is creating a new series of works on paper and circular canvas, presented as a ceiling painting. In this cycle she mainly concentrates on the accumulation of image layers in which she, using an archaeological method, once again releases the underlying structures: “By overlapping various layers and then (partially) scraping them away again, I attempt to reveal ‘the true self’. Where exactly does one find ‘the true self’? Does it even exist? Identity is fluid, and the works demonstrate this by the different ways in which figure and surroundings relate to one another and through the various roles in which we may find ourselves,” the artist explains. She then wonders: “What is a mask and what is the true identity? For instance, an exotic-looking woman becomes visible through a covering of plants. It is not clear which image layer is the foreground or the background. Does she wish to appear or disappear? And which ‘gaze’ predominates? Is the woman a ‘trophy’ or is she aware of her erotic power and does she use this energy for herself?”