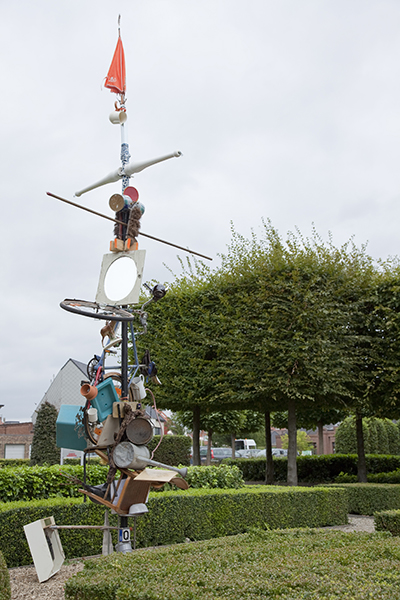 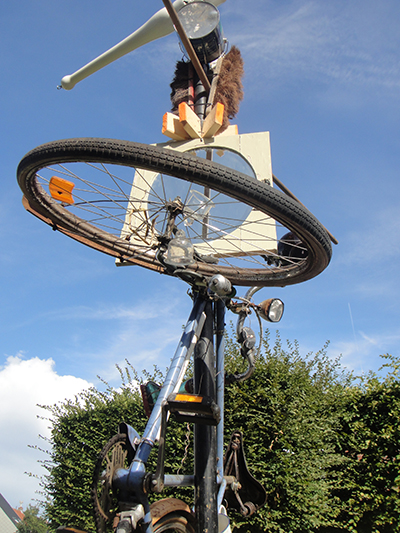 Gabriel Rico Jiménez participated at Coup de Ville 2013. This text was published in the catalogue.

Gabriel Rico studied architecture but reveals himself as an artist. A central concept within his artistic practice is ‘fragility of the space’. Rico examines space not only in its manifest physical form but also approaches it as an entity wherein historical, political, socio-cultural, and economic forces are interacting with each other. Depending on the concept, he uses in his dialogue with the (public) environment diverging techniques and materials.

‘La inclusion de mi raza’ (‘The inclusion of my race’) consists of several totem poles. On these totem poles he affixes an accumulation of different objects that are brought to him by the people. Via this form of participation, Rico wants to shorten the distance between art and the public. The elements of the composition are being determined by the contributions of individual persons, without pursuit of any aesthetic pretension. Rico empathises an artist like Allan Kaprow, who described himself as an ‘un-artist’. In the process, ordinary, everyday things are barely transformed or purified into an idealised form. Hence, the significance, and meaning, of his work is rather  to be found in its capacity to create a communality. The study of anthropology discovered that the gift –  or ,more precisely, the offer – often constitutes the engine that drives the economic process. At the same time, the artist poses questions about the economy and the moral behind utilitarianism that excludes a great number of things, individuals, and groups. The artist probes the concept of the construction and who is, or is not, represented in it. For that reason, his preferred location was the proximity of the psychiatric institution Sint-Lucia. The aspect of presence or absence within the social sphere ties in closely with Ralph Ellison’s Invisible man (1952). In this novel, the plot is not carried by a sci-fi character, but the principal protagonist, who represents a larger population group, is the victim of stigmatisation and social exclusion. Accompanying his totem poles is music by Jan Van Saene, who resides in the Psychiatric Centre Zoete Nood Gods in Lede, and ‘(What Did I Do to Be So) Black and Blue’ performed by Louis Armstrong.