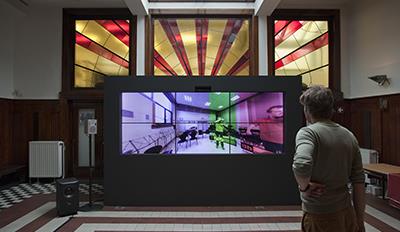 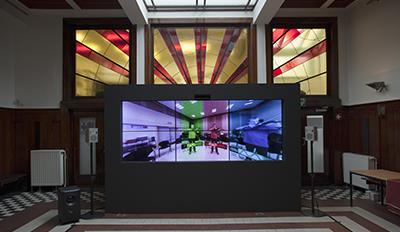 Eric Joris / CREW participated at Coup de Ville 2013. This text was published in the catalogue.

Catalysed by Eric Joris, CREW – a team of artists, technicians, engineers and theatre scientists – has explored the potential of immersive theatre for more than ten years. Every spectator is thereby situated in the centre of the experience, mainly one-on-one, occasionally in small groups. CREW questions a variety of presentation modalities and examines, among others, the ‘perspectival model’. In so doing, this collective creates new points of departure in order to arrive at a different experience of spatiality – experimenting with 3D environments that reconfigure digital sketches, film images and sound. The traditional, ‘static’ production of images hereby receives an extension to an affective experience of space and typically develops in time.

For decades, the Vooruit in Ghent was ‘the cultural bastion of the working man’, and on the occasion of its hundred-year existence in 2013, the music club Harmonie De Toekomst (The Future Harmony) from Sint-Niklaas has been given a lead role in CREW’s production C.a.p.e Vooruit. In collaboration with the music ensemble ‘ChampdAction’, the anthem par excellence, ‘The Internationale’ (composer Pierre De Geyter), was selected as the starting point for a crossmedia adventure. This leads to various artistic explorations in which the comfortable contours of stereotypical performance practices (in regard to music, choreography and registration as well as experience) are kneaded into an extensive experimental agility. For instance, Harmonie ‘De Toekomst’ performs the legendary composition in reverse and the musicians march backwards while performing the piece. Eric Joris’ interest in perspectival systems is linked to contemporary technological possibilities, creating a new window on reality with an alternative experience. This is mainly caused by a reversal in the use of the camera. In its most advanced form, the movement of the viewer becomes a parameter that modifies the image presented: you not only watch the image, but the image watches you. By means of a software interface, the camera no longer remains a passive, recording eye, but is an impetus to interactivity.