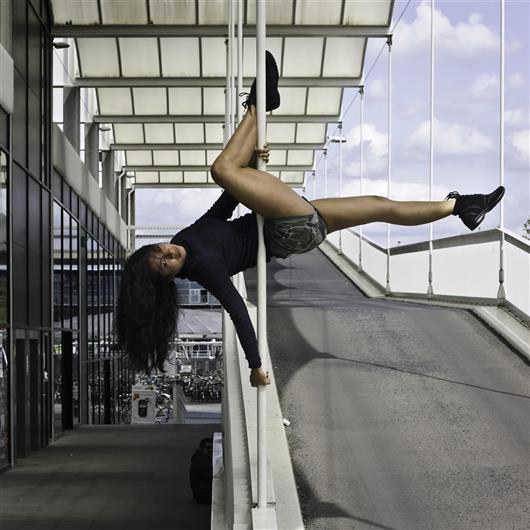 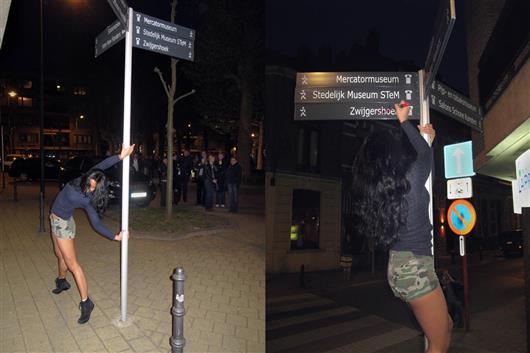 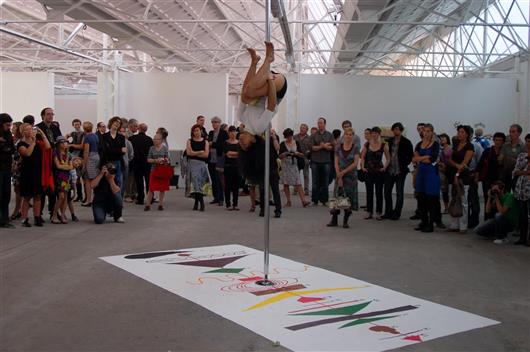 lives and works in Manilla — the Philippines

Eisa Jocson participated at Coup de Ville 2010. This text was published in the catalogue.

Eisa Jocson wants to separate pole dancing from the environment with which it is usually associated, such as exotica, sexuality, and grubby nightclubs. In her exploration of pole dancing as an artistic movement, the artist finds the link between the body and the physical environment provided by a city. Her various pieces of work, which she groups under the title of Stainless borders project, take on the character of performances, and hark back to the street acitivities of the Fluxus movement from the Sixties. Jocson's contribution to Coup de Ville consists of various temporary interventions during which she systematically explores parts of the inner city.

Even during her initial exploration of the city, Jocson put on a couple of performances in public spaces. On each occasion, she departed from prepared drawings on which she had descibed all of the movements and the various props that she would use. The choreogrpahy was performed with the aid of traffic signs, signposts, railings and other architectural elements that were present. Because of the physical intensity, the performances never lasted long, but they did confront the casual passer-by for a moment with an unusual behaviour pattern. What remains today is the artist's signature, written on street furniture with a black felt-tip pen, and a photographic and video record of the incidents.

Using her intrusion into public spaces, Jocson explores power relationships and the current trends of voyeurism and surveillance. The artist subversively imposes her own movement patterns on the design of the existing spaces. By doing so, she breaks through the limiting or conditioning influence that public spaces imperceptibly impose on us. Symbolically, she transforms the urban environment into a platform on which personal creativity is able to develop, and starts a vitalisation process. No matter how ephemeral and transient her intrusions are, through her direct confrontation with the public, Jocson opens the debate about public spaces.