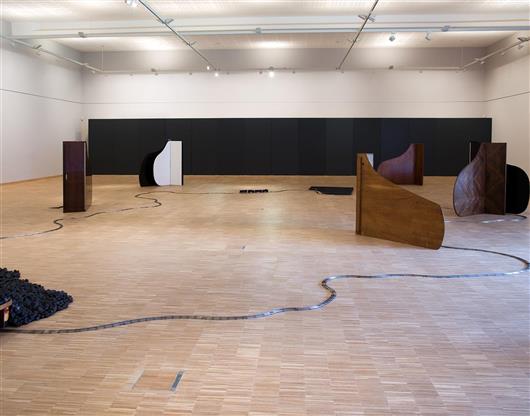 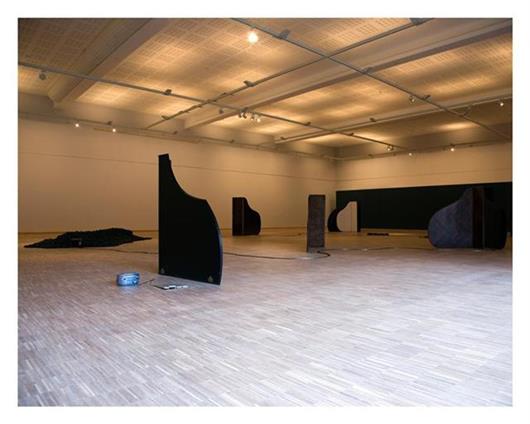 David Hammons participated at Coup de Ville 2010. This text was published in the catalogue.

American David Hammons is an artist, musician and magician. In his visual work, he starts from his ethnic black background, thoroughly questioning art and its institution. Hammons uses everyday materials for his stagings, improvising them together. This encourages onlookers to improvise a meaning for themselves.

The installation Chasing the Blue Train consists of a series of grand pianos, some piles of coal and a small steam locomotive that rides the rails through this 'landscape'. Hammons uses the pianos to refer to blues and jazz music, which may be seen as typical characteristics of black culture. The coals not only provide fuel for the locomotive, but 'coal' was also used as a term of abuse for Afro-Americans. The Great Depression occurred during the harsh living conditions in the 1920s and 1930s. Many black people were forced to travel from city to city by train looking for work in the coal mines. They were - symbolically - chasing their fortune, which explains the title Chasing the Blue Train. The circumstances under which they travelled were the opposite of the comfortable travelling accommodation of the Train bleu, which took the European bourgeois and nobility to resorts such as Cannes and Nice.

Already before the major economic recession at the end of the 1920s, the Harlem Renaissance also appeared in the US. Blacks became conscious of their own identity, which resulted in a first cultural flowering. The words "Blue Train" also refer to John Coltrane's later record album of the same name (1957). This installation also features music by Coltrane and other jazz musicians. In this way, Hammons not only links different media with each other, but he also integrates cultural expressions of a particular social and economic context. In accordance with the original idea (and with the artist's consent) train rails were added to the piece. It is part of the S.M.A.K.'s collection in the Blegian city of Ghent.