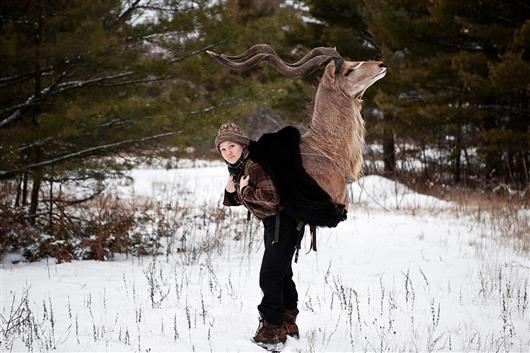 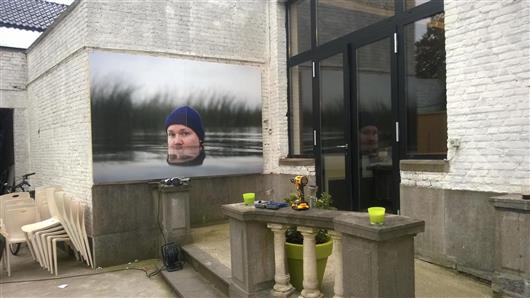 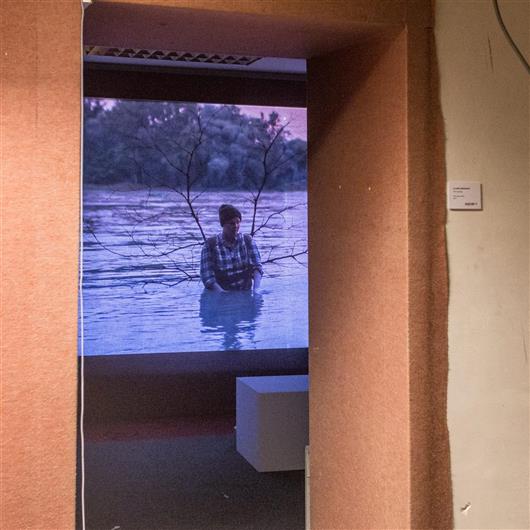 lives and works in Michigan — USA

Clare Benson participated at Coup de Ville 2016. This text was published in the catalogue.

Clare Benson takes photographs and videos, and realizes artistic presentations but often interweaves these elements. In her case biographical inspiration transcends the limitation of personal experience. She is a link in a matriarchal tradition that specifically manifests itself in hunting and is thus passed from mother to daughter. Her family have lived for many generations in the rugged landscape of north America. Hunting has been synonymous with self-protection and survival but it also reflects a respectful relationship with the overwhelming and often unforgiving character of the natural environment. The concept of ‘pristine’ nature cannot therefore be simply interpreted as idyllic and refers rather to an environment that can ruthlessly put humans to the test. Benson’s art works also reflect on such topics as survival, surrender, mortality, the futility of power and impotence and the resistance that lies between them.

The video The Leaving typifies her work, being created during a study of hunting rituals near the Slovakian town of Bratislava. As in many of her works she is the main character utilizing simple operative techniques. Benson characteristically uses precious few resources to visualize her thoughts. In this video work she stands up to her waist in a flowing river. Lingeringly she breaks off her wings made from branches. The removal of the branches refers to the changing seasons, the cycle of nature, the destruction which has to take place before something new can be created.

The selected photos in the exhibition are part of the series The Shepherd’s Daughter. In these images she recreates experiences, memories and dreams from her childhood. Despite the hunting context weapons are never displayed lest one should form the impression of dominance, let alone arrogance towards nature. Man is not engaged here as a master of nature as portrayed in the book of Genesis. With the knowledge and resources that are available man tries- often literally – simply to remain upright. Thus her artistic practice is not so occupied with the primitive, and its concomitant glorification, but relates to the primary concept: that which is essential for our existence.