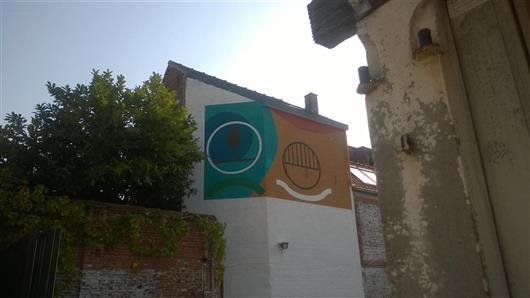 lives and works in Oostkaap — South-Africa

Buntu Fihla participated at Coup de Ville 2016. This text was published in the catalogue.

The South African artist, Buntu Fihla, came on prospection in the summer of 2015 to prepare for his participation in Coup de Ville. He travelled to Sint-Niklaas from Switzerland where he was living with other artists in residence. Since he works principally as a graphic designer, he remembers the statements by Saki Mafundikwa from Zimbabwe, an authority in the field of typography, who described Swiss typography as ‘the embodiment of the cold in that country, where the raster serves as the cornerstone for all shapes, whether architectural or graphic. Their extreme dedication to neatness and order results in everything being deathly, mundane and inanimate’. In contrast, African typography, he states, is the complete opposite and is warm, humane, funky, organic, liberated and not imprisoned in a puritan strait-jacket.

It is noteworthy that Fihla was already inspired by this typographer, especially by his book: Afrikan Alphabets: the Story of Writing in Africa, published in 2004. In his project for this exhibition, Buntu Fihla starts from the earliest recordings of oral communication in Africa.

From this rich visual heritage he selects four symbols which were developed by the Buntu population and which are part of the most ancient forms of the script. The pictograms represent: race, pride, peace and future. He incorporates the geometric signs in a wall painting, which dovetails with his first artistic declarations. His journey into graphic design travelled through street art, which, a.k.a. in ‘Bief 37’, still remains a South African icon. As a street artist with a guerrilla strategy he operated in abandoned areas with the aim of restoring their accessibility. In fact, these were often simply ‘no-go’ zones where drug trafficking, rape and murder were the order of the day and where he attempted to provide resistance with art. His attitude is actually tinged with a socio-artistic focus and the road to the gallery circuit remains for him a somewhat uneasy concept.