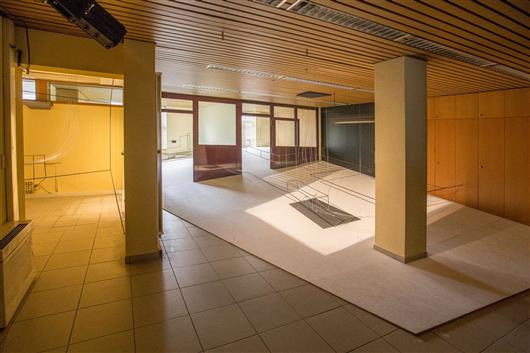 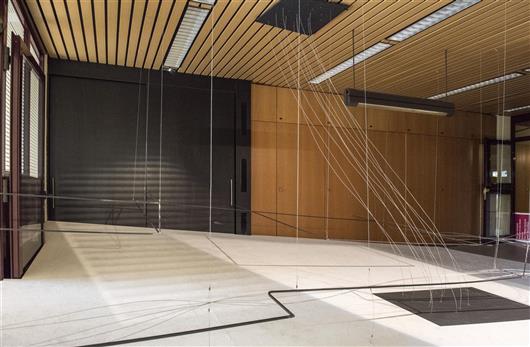 Bart Prinsen participated at Coup de Ville 2016. This text was published in the catalogue.

Bart Prinsen is interested in invisible and intangible systems in the urban fabric. He is fascinated by interim spaces, peripheral areas, places in transition and borders where inside and outside connect. He delves for traces left behind, how they live on in our memory or concocts worlds reminiscent of an earlier existence. As in many cities, he finds in Sint-Niklaas both emptiness and places in metamorphosis. He realizes his contribution for Coup de Ville in a former bank branch waiting for a new use or interpretation.

Prinsen experiences the bankruptcy or ‘implosion’ of a bank as a major impact on the environment and acknowledges that economic activity involves numerous other facets in society and threatens to absorb them. Prinsen transposes this concept into a sloping plane based on the floor plan of the relevant bank branch. It is a skewed floor which can be walked on through all the offices and provides a displaced and distorted perspective on the area. Any reminder or attempt to reconstruct actuality inevitably distorts the reality: parts either disappear or become magnified, literally creating a gap in the memory. He interprets the entirety as a fictional disappearing process in which the bank is shrinking and sinking. Symbolically the area implodes into a black hole. In a place where there was a desk, he creates a shrunken copy from thin iron bars.

Due to the fact that the financial world operates increasingly with invisible transactions, we can no longer understand what is happening with our money. Utilizing network cables leading to the hole, Prinsen alludes to these virtual actions. In addition, steel cables that traverse the area depict visual signs of movement. Positioned above, in and around the inclined plane, these wires represent the connection with the urban environment of this location. This interplay of lines within the space creates transparent and three dimensional drawings. In addition, Prinsen also uses steel cable to visualize the trajectories of people who once moved to and from the bank. He argues that once a certain route is no longer used there is a delay before the automatism fades. In this case, the workplace is an empty environment, changing and shifting, waiting for a new function while the former purpose is gradually erased from memory.