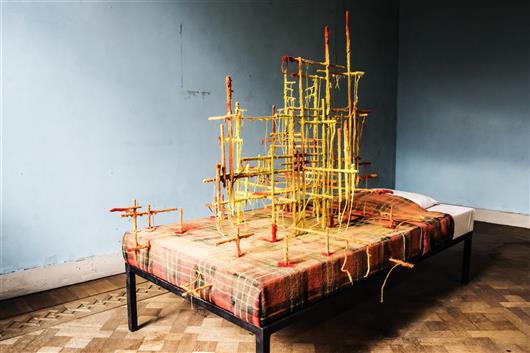 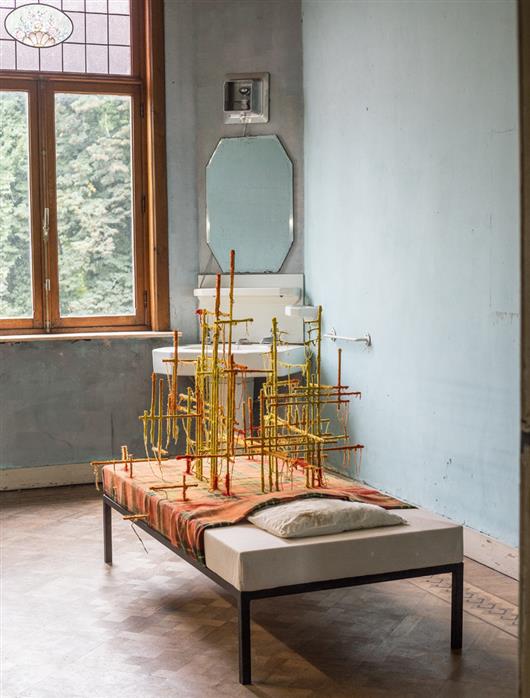 Anton Cotteleer participated at Coup de Ville 2016. This text was published in the catalogue.

In the exhibition Coup de Ville, Anton Cotteleer presents a new sculpture: ‘4AM’. The work consists of a made-up but unkempt bed, which seems to be the matrix from which a rampant structure rises. According to the painterly tradition, one can categorize the work as a nocturne, which evokes reminiscences of Goya’s work where the sleep of reason produces dream and irrationality.

‘4AM’ looks used and worn, the pillowcase is dirty and dusty and the blanket with the grid pattern is blurred by the various layers of cloth which have been added. The variety of textures and the treatment of the surfaces – the care taken with the skin of the image – is a recurring focus for this sculptor. Any suggestion of figuration is avoided so that the dialogue between the horizontal and vertical axes becomes more emphasized. Although a nod to the history of the sculpture is contained in it, we remain in the dark as to its significance. In Cotteleer’s oeuvre, constructed through intuition and association, this is not unusual.

It is precisely the familiar, which we trust and appears logical, which plays a crucial role in his work. In fact, he even seems to cherish the normality but mostly he realizes how easily and suddenly it can be brought down. There is just not much needed to impair what is familiar to us and usually gives us stability and security. Often it is only minute deviation which makes for the collapse of entire systems. In the majority of his sculptures Anton Cotteleer prompts an atmosphere in which one believes he has taken ‘the wrong turn’ to arrive in a world that is alienated from us. Nevertheless, the artist uses elements from our everyday surroundings like a chair, table, bed, tabouret, blanket and suchlike. Through unexpected compositions and minor additions, Cotteleer loosens our grip on the depiction and meaning. Nothing seems more complex than the normality of existence, life and death and the endeavour to fathom it out.