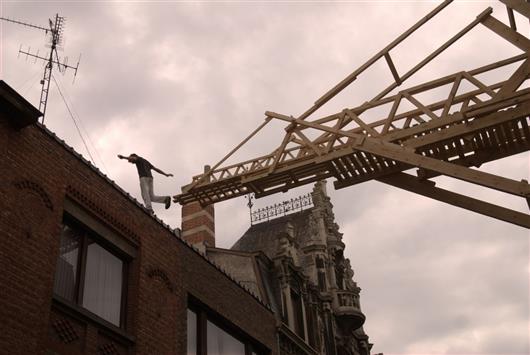 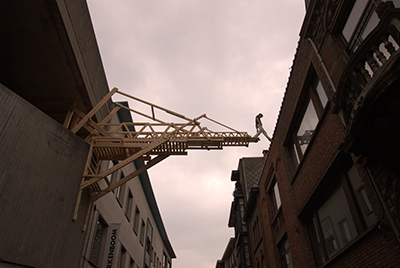 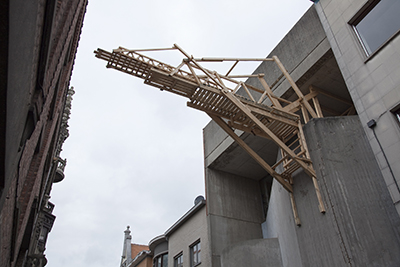 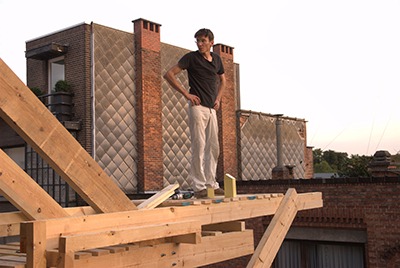 Adrien Tirtiaux participated at Coup de Ville 2013. This text was published in the catalogue.

As co-founder of the initiative hotel charleroi, Adrien Tirtiaux is throwing a bridge in this Walloon city, uniting artists, politicians and the people. His artistic projects are characterised by their dynamic nature, ready adaptability, consultative cast, and awareness of the possibility of failure. For example, a wall - ereted from a pile of separate bricks - visually represented his proposal to lump the prize money of the Young Belgian Art Prize (2013) in Brussels together into one pot and distribute it equally amongst the selected artists. Because of resistance by other participants, the proposal went nowhere and the wall never got connected to anything. He frequently throws such bridges and they may be quite precarious, fragile and unpredictable in their construction.

For Coup de Ville, he is for the first time constructing a real bridge, selecting for the purpose an old school building erected in the early 1970s by Lode Verbeke, an architect from Flanders Waasland, and featuring a brutalistic concrete style. Starting from a robust protrusion above the entrance portal, he constructs for himself a path to the other side. Step by step he reinforces the wooden construction that continues to increase in keeping with the principle of 'ever higher', just like his tower made of Lego blocks in Vienna in 2008. "The bridge starts out wide and finishes narrow, which may be interpreted as a metaphor for student expectations, and (life's) journey with ever diminishing opportunities. What interests me is something that is site-specific and, at the same time, possesses metaphorical, symbolic and political worth and merit with validity within a broader context."

Generally, after analysing a context, Tirtiaux, an engineer-architect by training, points out problematic situations and examines how the artist's thinking relates to this. In spite of the fact that, according to the antropologist Claude Lévi-Strauss, the reasoning and actions of the engineer and the tinkerer are strongly divergent, both frequently appear frequently geared to problem solving. According to the same theory, artists combine both these thought processes and, following a set plan, resort to improvisation, making use of what is at hand or available. Tirtiaux notes many artists, however, have lost the ability to tinker, the playful discovery that leads to understanding.