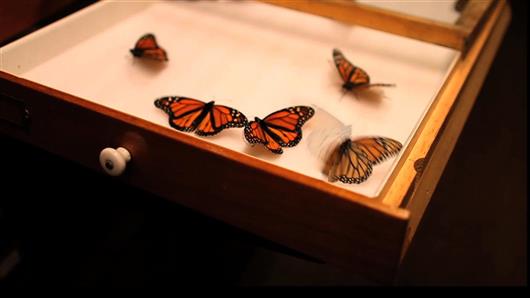 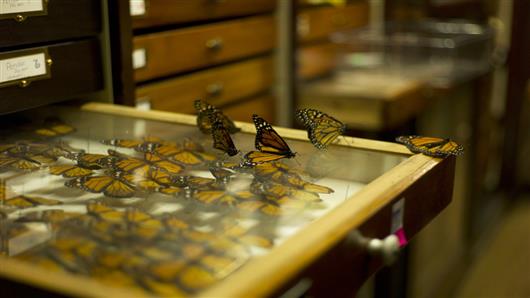 lives and works in Tel Aviv and New York

Dana Levy participated at Coup de Ville 2016. This text was published in the catalogue.

The artistic group ‘The Chrysalis’ was one of the alternative societies that took up arms against the conservative art establishment in Belgium at the end of the nineteenth century. The most important item on the agenda was: change. This was the reason for the choice of the reference to the butterfly and their name ‘chrysalis’, meaning emergence. In their artistic manifesto they present fluttering butterflies that emerge from their cocoons to become brilliant new creations.

For the making of her video ‘The Wake’, Dana Levy managed to persuade the staff of the Carnegie Natural History Museum to allow her to film there. Photographer and video artist Levy likes to make reference to the past and loves places where the signs of ageing are tenable. Each visit to a museum is always a symbolic voyage in time. This is especially true of natural history institutions: yesterday and tomorrow suddenly widen into a timescale counted in millions of years. Every object that can be seen there appears to be embalmed forever, and the reason for the wordplay of museum-mausoleum  is clear. In ‘The Wake’, Dana Levy brings this static world to life. Her lens glides through the cabinet in which butterflies are carefully preserved, pinned out in neatly arranged rows. To begin with, the only movement is from the camerawork, the change in the picture frame and the montage. Some butterflies appear to have left their glass case and in some of them a slight vibration in their wings can be seen. The delicate fossils seem to have woken and broken out of the order in which they had been placed.

Domestication, and the control and extensive hold man has on his environment, are a recurrent theme in the work of Dana Levy. She regularly plays power and weakness, passive and active or wildness and tameness as contrasts against each other. This pairing of opposites or categories forms a foundation for her work, in which a story unfolds each time. Levy finished the montage of her film just as the Arab Spring began. She told Nomi Lev from the art magazine Artforum that as an American- Israeli, it was clear to her that the awakening in her film was a poetic parallel to these events.