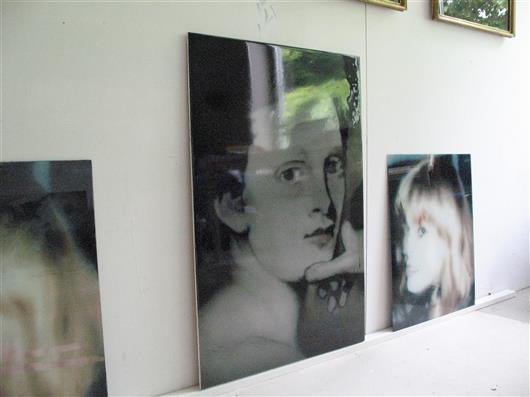 K1 is a window, located at Apostelstraat 18, right next to the WARP-house.

This exhibition space is a platform for visual young artists. Each month another artist is given the opportunity to present his or her work.

In 2008 Sarah De Vos earned her Master of Arts in painting at the Sint Lucas Academy in Antwerp. Since then she has worked in Leuven. In 2009, she began her two-year work period at De Ateliers in Amsterdam.

Sarahs paintings, which start from snapshots she makes herself, explore the deceptions of observation. Both technically and content-wise she builds up substantive layers. A clear view of the painting is obstructed by the manipulation of framing, reflection and contrast.

The ongoing research in the idea of flattening the painting and at the same time searching for the suggestion of depht in the image submerges to the idea of COVER, where hiding or not showing changes in ever new forms. Also the idea of reproducing and interpreting an image/reality is always present in her work. Without diminishing it s aura, but rather reinforce it, by a sensitivity which is acquired in the secure construction of the paintings.